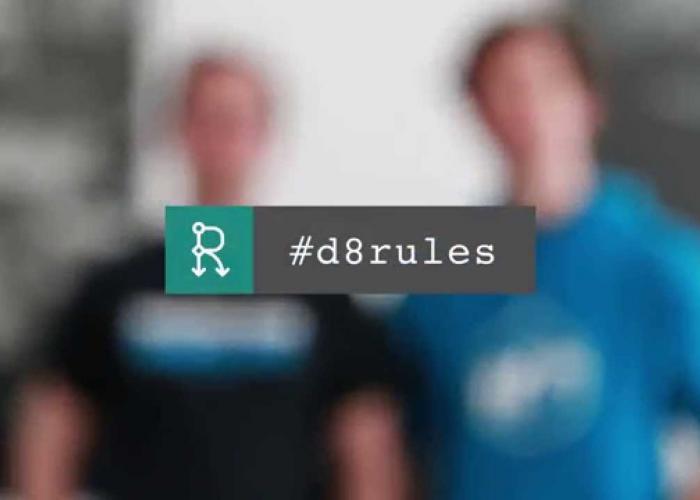 Have you ever dreamed of automating your Drupal site? Want to send out customized emails automatically to notify your users about updates? Automatically update a Block on the Home page after the 100,000th user visits your site? Create custom redirections, system messages, breadcrumbs? Rules for Drupal 8 can help you do this and much more!

The Rules for Drupal 8 module allows site administrators to define conditionally executed actions based on occurring events (known as reactive or ECA rules). With Rules, site builders have a powerful interface to implement custom workflows on their site. This has proven to be an essential tool to the whole Drupal ecosystem. By 2014, the Rules module had over 200,000 reported active installations. Rules currently ranks amongst the top 20 most popular Drupal modules and is used at 1 out of every 5 Drupal sites in the world.

Rules integrates with Drupal Core APIs and all structured data exposed using the Entity and Fields systems. Over 350 other contributed modules integrate with the Rules API to provide their own custom events, conditions, actions or exposing custom data in a reusable way.

The D8rules project has proven to be a key to opening trust and success of any future crowdfunding projects on Drupalfund. Drupalfund was first announced during Drupalcon Munich. The very first Drupalfund project was created during Drupalcon Prague.  Before D8Rules, Drupalfund has seen 7 successful campaigns, but none of this size. The folks behind Drupalfund believe that if they can raise enough funds to fully support the project, the community will begin to trust crowdfunding - a huge boost to the entire Drupal development project, enabling those who contribute.

The Status of Rules for Drupal 8

The upcoming revolutionary release of Drupal 8 is a complete rewrite that the community has been working on for the past three years. The folks behind Rules for Drupal 8 believe that the D8 release will be as successful as how complete its ecosystem is. For this reason, they plan on having Rules ready as early as possible.

As of early April, #d8rules has reached their second milestone. The last four months, the team has been busy getting the Rules MVP ready for Drupal 8. Thanks to funding provided by Acquia, drunomics and epiquo, #d8rules contributors were able to dedicate over 300 hours to implementing the most critical features to reach 2 out of 3 of their planned milestones. Milestone 3 is all about getting a final release of Rules for Drupal 8 ready.

The Rules module has been featured in many places, including books, on-site DrupalCon trainings and online learning series, screencasts, and even a famous Drupal event presentation by Amitaibu.

The Secrets of Organizing Your Higher Ed Site, Part 4 of 5: Decide

The Secrets of Organizing Your Higher Ed Site, Part 1 of 5: Inventory

Why a Discovery Phase is so Important to your Website Project